Dog games are fun and a wonderful way to bond with your dog.

There is quite a bit of misinformation with regard to playing tug-o-war with your dogs. Some think doing so will make dogs aggressive. The bottom line is that it is actually safer to play this game because while playing you are teaching a release cue.

The image below is a perfect example of a pup trying to engage in a game of tug – o – war with your pant leg; a very common inappropriate games all puppies try to play. However, this is also one of the best opportunities to teach your new pup what’s appropriate and what isn’t appropriate behavior. Trade up! When your pup grabs your pant leg, slippers, shoes, etc. simply stop moving, offer one of his toys and begin teaching appropriate tug – o – war as I’ve described below. 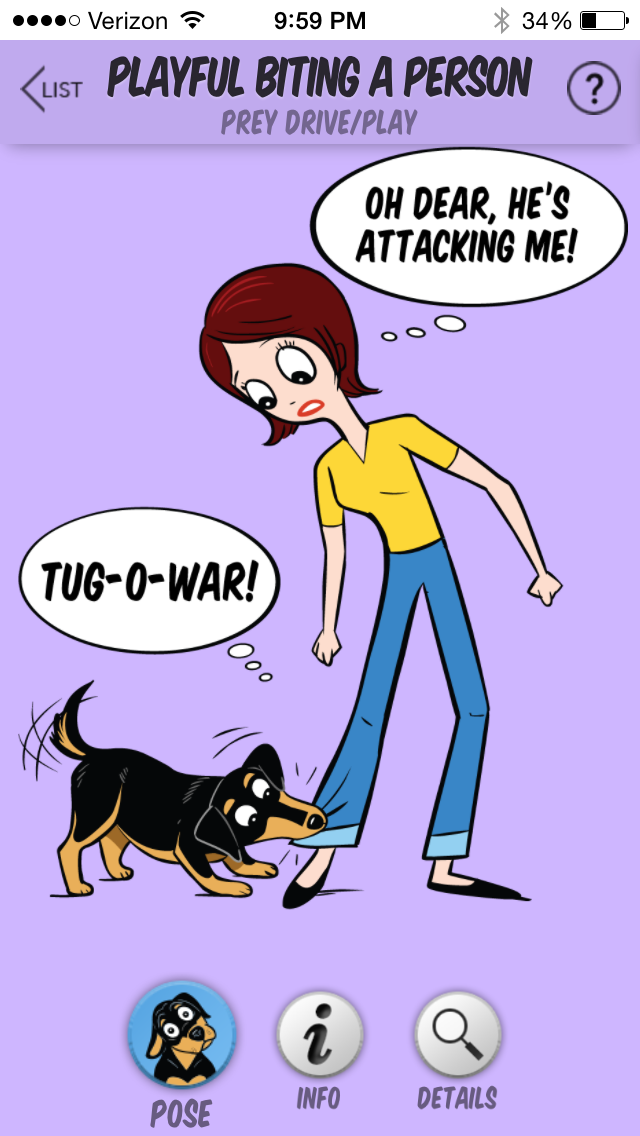 No, he’s not attacking and your chance to teach appropriate play. Image from Dog Decoder smartphone app. Illustration by Lili Chin

This is one of the first games I play and teach first along with Fetch. I have all my clients teach it to their pups’ within their first week of coming home. Playing these two games teaches three very specific cues: Ready, Get It or Fetch and Thank You (thank you is my version of Drop It). When your pup learns at a very young age to give something back to you it will reduce or eliminate any chance of a pup growing into a resource guarder or becoming aggressive over toys or food as an adult; which is the opposite of why people think they can’t play tug-o-war. 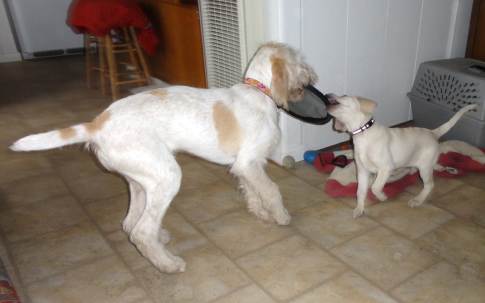 It’s a natural game for dogs. Photo by Jill Breitner

Puppies put everything in their mouths because this is how they learn about and explore their world. We can’t and shouldn’t squelch this behavior but allow it while observing how they learn about their world. When they put something in their mouths, be it one of their toys or something inappropriate, I watch to see if I need to intervene and teach, redirect to another toy or enjoy the show. Since I also train Service Dogs, they may need to pick things up for their guardian which means that anything a puppy puts in her mouth must be treated as gold and my body language and energy will make or break whether the pup brings it to me, tries to make a game of chase or tug-o-war. The teaching begins with the understanding and combined effort at reading each others body language and energy and responding appropriately.

Playing tug-o-war is one of the best dog games you can play with your dog and is so much fun for both of you. So have at it. When you’re ready to stop playing, simply stop tugging while continuing to hold the toy, saying ‘Thank You’ in a very quiet and soft tone of voice. The hard part is stopping tugging, don’t let go, just stop tugging. Your pup will continue to tug but you’ll stop everything; your body language, your energy, your pulling, your enthusiasm, laughter, grrrrrrring, everything stops. Your pup will sense your complete energy shift and will automatically match your shut down energy and will let go of the toy because of the shift in your tone of voice and energy. When she does, you’ll lavishly praise and/or offer a treat and begin again with the same sequence; ‘Ready’, ‘Get It’, ‘Thank You’. Repeat about five times and quit. Short periods of play/training at this age is all you need. The game of tug-o-war is interspersed with fetch, in that sometimes you’ll just ask for the release ‘Thank You‘ and sometimes you’ll play tug before you ask for the release.

How bout that? You’re teaching three essential cues while playing fetch and tug with no aggression, only pure enthusiasm and your pup is only 8 wks old. You’re off to a great start, so have a blast playing tug -o – war.