In a world where transparency is going by the wayside, it’s even more important to educate ourselves, especially when we are the voice of the voiceless. This article is my opinion and I encourage you to do your homework as well.

Because of the recent viral video of the German Shepherd, Hercules in A Dog’s Purpose and Cesar Millans’ Reality shows, I scoured American Humane Association’s; AHA’s website for information about the meaning of ‘No Animals Were Harmed’ to see why the suffering of animals continues and found these guidelines.

There are 131 pages of very specific guidelines for the safety and protection of animals in filmed media. I pulled out what I thought were the most important parts of the guidelines, to make it easier for you, but feel free to have a look at them yourselves. You will see my comments in italics throughout these excerpts. Everything in italics is directly from AHA guidelines. 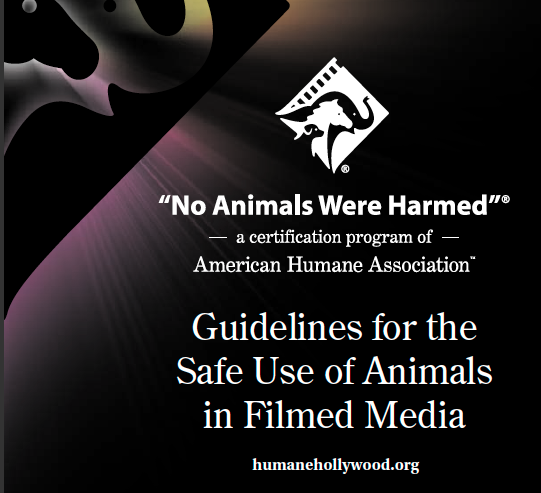 AHA representatives are required to document and record their findings. These recordings can be found in files maintained by AHA, yet, I’m unsure of their transparency as they have promised an investigation and we have yet to hear from them. I have reached out for comment to the director of communications, Mark Stubis and have not received any comment, since my first inquiry, where he said ‘They are doing an investigation”; no replies to my subsequent follow up emails, to date.

DEFINITIONS: I pulled out these specific terms because in my opinion they are not always adhered to.

These guidelines speak volumes for all filmed productions. Animals were harmed during filming and they will continue to be unless and until we SPEAK OUT to those who can do something about it.

1-22  American Humane Association must witness all filming with animals in order to properly document their use.

a.     Production shall provide the American Humane Association Certified Animal Safety Representative(s)™ adequate placement during filming in order to witness all animal action.

1-26  When animals are on set, production shall proceed in a timely manner. Most accidents and misbehaviors occur when the animals get tired of waiting for filming to begin. I wonder if the investigation was just reviewing the footage and blaming, PETA and AHA or if this so-called third party asked these appropriate questions about that day of filming.

IMPORTANT REMINDER: Water flows fastest at its surface. The deeper the water, the more force it will have, making footing for animals and conveyances difficult.

a.   Any signs of stress and/or tiring of the animals.

b.   Any change in environmental, climatic or man-made factors which may affect the outcome of the stunt/intense animal action.

c.   Any breach of the Federal Animal Welfare Act and/or any state and local animal welfare laws and regulations, which clearly state that no animal shall be put at risk, overridden, overdriven, overloaded or ill-treated. Any violation will be reported.

7 -1. Animals shall be adequately trained, conditioned and prepped for stunts and/or intense animal action.

7-3.  Everyone participating in the filming of a stunt or intense animal action, shall participate in all prep and rehearsals to ensure that all members of the safety team are informed about all aspects of the scene to ensure safety and eliminate possible hazards.

7-4.  Any intense animal action, including but not limited to chase or running scenes, must be staged to prevent animals from being overworked. This can be accomplished in the following ways:

As you can see, the guidelines clearly state that the production company is ultimately responsible for the safety and protection of animals on sets. You can also see where the holes are when an AHA representative fails to understand how to read body language, doesn’t understand modern science based training methods, even though it’s clearly stated “that animals may not suffer stress, anxiety or any emotional or physical discomfort and be treated with kindness, mercy and compassion and that a representative will uphold all animal cruelty laws” in their guidelines. It is quite evident, in my opinion, and many veterinary behaviorists and trainers who spoke out and concur, that they are failing in doing their job.

Also stated is that federal and state laws can override their guidelines. These laws are set forth to protect animals. Why, then do animals continue to suffer?

In a recent article/interview in A Humane Nation: Wayne Pacelle’s blog with producer Gavin Polone; he speaks of “moving away from AHA, to a new independent organization that is answerable to either the state or federal government.” While I agree with the lack of credibility of AHA and moving toward an independent organization, we must remember, in the guidelines from AHA, the producer is ultimately responsible for all the animals in filmed media. This means that Polone is ultimately responsible for the animals in his movie. He’s already admitted being culpable but where does this leave the movie including the stamp of approval when the AHA rep was suspended. Remember, it states in their guidelines that an AHA rep must be on site for the entire movie in order for a movie to get the recognition/approval of “No Animals Were Harmed”. No one has spoken about the suspended rep and when I asked them about this, I get no reply. If the rep was suspended, why were they able to keep the seal of approval?

In closing, the articles and follow up TV shows on Ellen with Dennis Quaid and the articles with and by Gavin Polone served as damage control and to deflect those 40 unedited seconds to the part that was edited and to blame PETA and AHA. The edited part was the ‘cut’ to when the dog was in the water and began to go under and then cut again, leaving the viewers to wonder if the dog had drowned. Yes, this part was falsely edited to make it more dramatic as was PETA’s purpose and to this day I’m not sure what their motive was but nevertheless, this deflection to reviewing the footage is just a part of the investigation. It served to speak to an audience who doesn’t know the ins and outs of editing and has a naive and overtrusting impression of celebrities making the smoke and mirrors very effective.

In order for us to take a stand against animal cruelty during filming for entertainment; it seems to me that we have an opportunity to take Polone up on his statement that he is going to make some changes in the filming  with animals, so that there is more oversight by an independent source. I say, we hold Polone to his word by reaching out to his production company, Amblin Entertainment and offering our support in his being true to his word. Don’t be afraid to make this call. I have but we all need to do this to stop the suffering. Call and ask if Palone is going to make these changes and to let us all know how he’ll do this so that the public can be assured no animals will be harmed during filming.

There is one more piece to this whole shebang and that is getting Animal Care and Control to do their part and as we have all seen, they turn a blind eye to animal abuse as seen by not investigating complaints against Cesar Millan’s Reality Shows.